How To Resolve A Personality Clash — All On Your Own 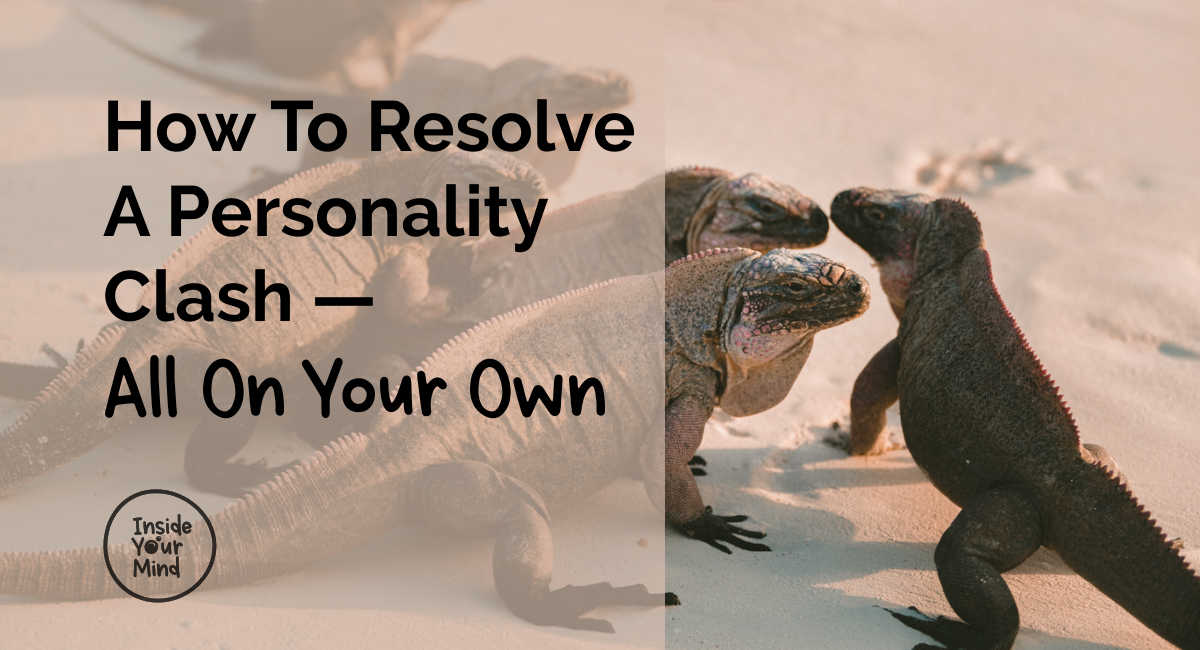 Is there such a thing as a personality clash?

When I was a young schoolgirl there was a girl in my class who hated me with a vengeance. Others might have considered it a personality clash, but as far as I was concerned Jean Owen was just a bully. She’d push me around and hit me whenever she felt like it.

Jean was much bigger than me — and I felt powerless to do anything about her behaviour. Jean was also the class clown and everyone else thought she was great. But I detested her with a passion. One day something serious happened …

I remembered Jean when I was working with a client

“I think we have a personality clash,” said my client, referring to a colleague of hers. “We really don’t have a relationship at all.”

In my own mind when I hear the term ‘Personality Clash’ I translate it into, ‘Insufficient skills or inflexible thinking.’

As I started listening to her, I realised that, over the years, she’d had a number of ‘personality clashes’ with a variety of people, this being just the most recent. My client —  let’s call her Tania — had a very blunt and assertive personality. So I decided that being forthright and direct would be the best way to work with her.

So, I ventured forth…

“So how are you relating to this person, Tania?”

“Well, you talk about a ‘relationship’ as if it’s a thing. In fact, it’s a process – the process of relatING. So, how are you relating to your colleague?”

“Well, I can’t stand him!” she said bluntly.

“OK, so if you can’t stand him, that must come across in the way you communicate with him.”

“Well, I guess I’d think that they didn’t like me.”

“OK. And if you thought they didn’t like you, how would that affect your response to them?”

She pondered this a while and then responded, “Well, I’d probably be a bit grumpy, maybe snappy. I wouldn’t be very happy. I’d probably wonder what I’d done. Or I might want to get back at them in some way.” 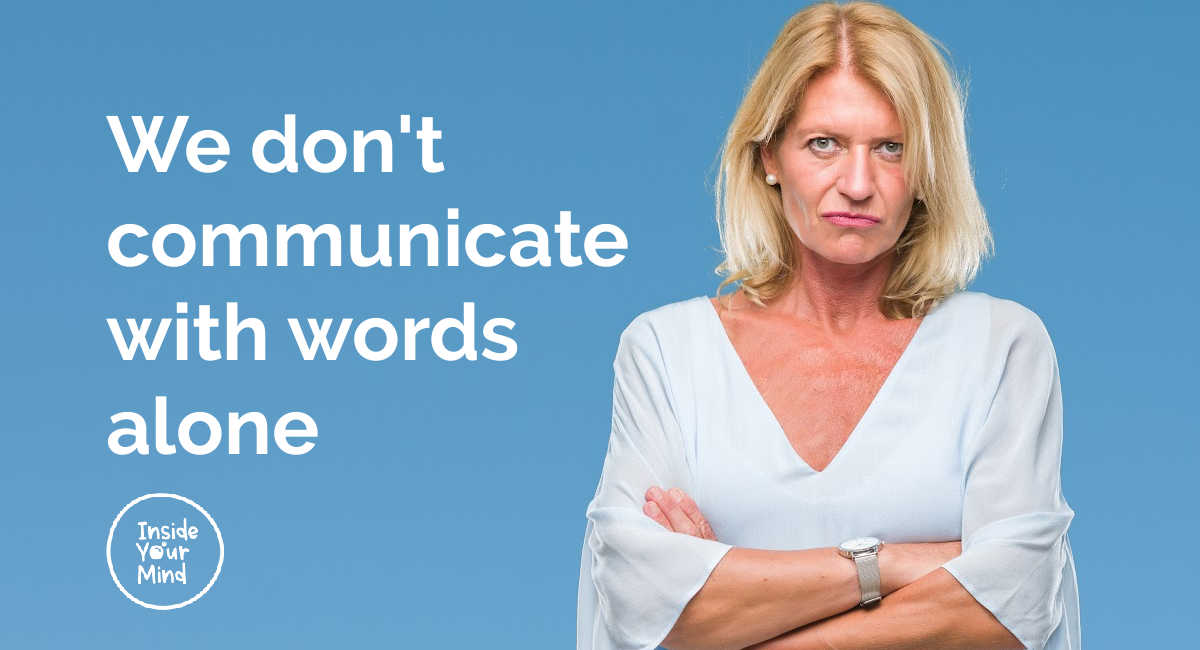 Pauses can be useful

“It’s important to realise that communicating isn’t something we do only with our voice and with words. We can communicate with gestures, with a tone of voice, with a look, with the content of what we say. We also communicate by who we talk to – and who we don’t talk to. We send messages by what we say as well as what we leave out; by the assumptions we make in our language. The way we dress gives people information about us, as well as the things we choose to have around us. In fact, we’re ALL ways communicating.”

I paused again because my client was now looking very thoughtful. Then I inquired, “What do think about what I’ve said?”

“Well, it’s a different way of looking at communication,” she said. “I’d never thought of it like that.”

“It’s also important to know that relating or communicating is systemic.” I continued, “For example, at the moment I’m talking to you and you’re listening. When you’ve heard what I’ve said, you formulate a response and talk to me. I listen to you, process what you’ve said, and respond. So it’s a system.” I said waving my hand in a circular motion between us. “And, because it’s a system, either of us can change the dynamics of it, or influence how it goes.”

While she was thinking about that, I suddenly jumped up and stood ominously close to and behind the chair she was occupying.

She leaned out away from me. I pointed out that my strange behaviour had caused her to respond to me in a different manner from when we were previously sitting having a quiet conversation.

“So if you apply the systems theory to the way you’re relating — or not relating — to your colleague, what can you change so you start getting a different response from him? Because, of course, if you keep doing what you’ve been doing, you’ll get the same response. To think you’ll get a different one is insane!”

“Well, if I start behaving differently, won’t he be suspicious? I mean I haven’t spoken to him properly for months!” she said.

“Probably, to start with. And that just means that you’ll need to consistently behave towards him in more appropriate ways, so he realises it’s not a ‘one off’ kind of gesture or some new and complex way of making him feel inferior!”

“Maybe I could apologise for alienating him all this time. I’m starting to think things have really gotten out of hand.”

“What did he do that you’re punishing him for?”

“Oh, he disagreed with me in our team meeting, and the team ended up supporting his point of view against mine.”

“Well, they preferred his idea.”

I didn’t respond. There was a long silence, which she broke: “What! Aren’t you going to say anything?”

“I’m worried that if I have an opinion, you might alienate me as well!”

“It sounds trivial now! Even pathetic!”

“Great!” I said, “So what are you going to do to change how you’re relating? Because if you change what you do, or don’t do, that will alter the relationship between you and him.”

“I’m going to apologise to him!” she said resolutely. “And I’m going to start treating him the same way I treat the others in the team. Nicely!” she added emphatically.

“Great! How do you think this will affect your team as a whole? Because they’re all part of a bigger system. They’re all connected in some way.”

“I think everyone will feel more comfortable. I have noticed that if one of our other team members is talking to him and I come along, they both look really uncomfortable. I liked seeing him squirm, but felt sorry for whoever he was talking to!” 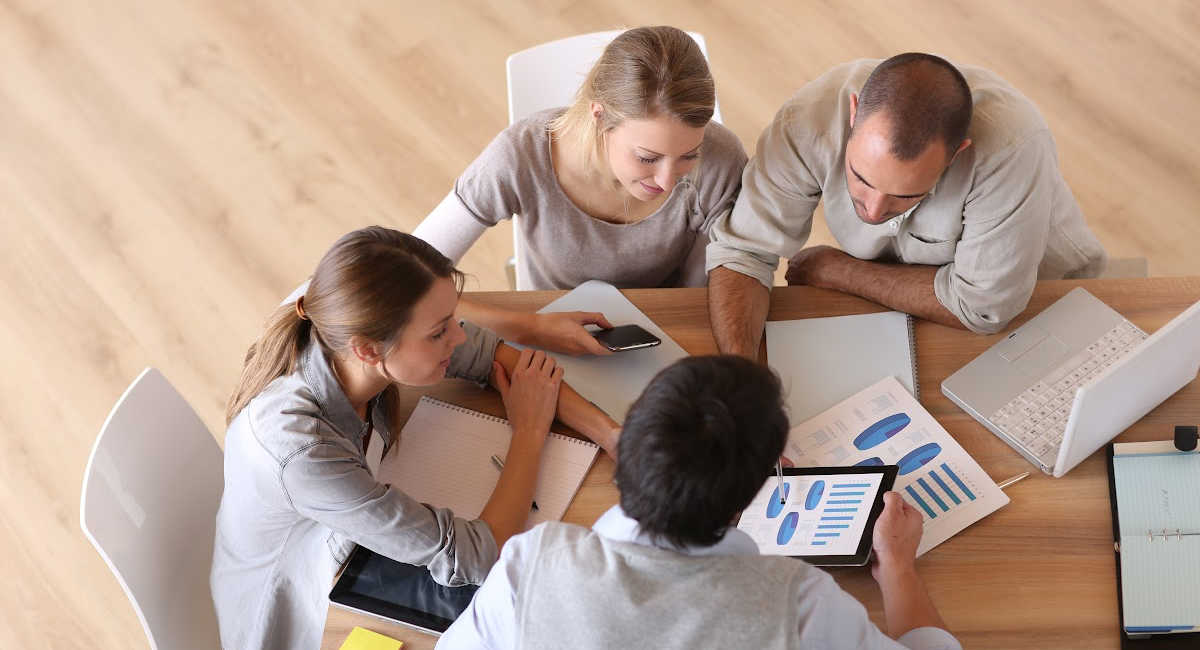 After this initial conversation, we talked about some other ways she could mend the relationship.

It only takes one person to resolve a conflict

The other person involved in this, ‘personality clash’ was never involved in its resolution. The team/system that my client was a part of changed because she changed — because she began doing things differently.

She learned to be more flexible in her thinking and in the ways she communicated. The whole team got along better, communication was more open and trusting, and morale improved enormously.

The answer to the question?

So, to answer the initial question, ‘Is there such a thing as a personality clash?’ I believe that if one person has enough flexibility in the way they communicate and is prepared to look at, and address how they might be contributing to a negative or destructive relationship, then a personality clash can be avoided.

The day arrived when Jean pushed me beyond my limit. I went past being frightened and hurt to the point of absolute rage. I hit back — several times! We ended up having a big scrap in the middle of the playground. The most vivid memory I have of the event is that I was wearing red tights and Jean was wearing green tights. By the time a teacher came and pulled us apart, our bloodied knees were protruding through gaping holes in our hosiery. We must have looked a picture – and not a pretty one!

The shame came shortly after

Fairly soon afterward we found ourselves standing in front of the headmaster, heads bowed low and sobbing.

The details of what happened then are a bit hazy, but from that day forward there was no personality clash. Jean and I were best friends and she never bullied me again. In fact, she became my greatest supporter and collaborator in many childish pranks as we went through school together.

I changed the system

The point is that I had to do something different in order to change the way we related because continuing to be bullied and hoping it would stop was just not working! With the benefit of age and more wisdom, I know it was standing up for myself that one time, caused Jean to respond differently to me. My fighting back affected the system between us. That action — although perhaps a bit drastic — changed our relationship forever.

P.S. You’ll be pleased to know that I no longer fight in the playground! 😀

← Funny Things Kids Say, Write And Have Opinions About 12 Novel Reasons To Get Yourself A Coach →