How To Overcome Overwhelm: A Simple 5-Step Strategy To Put You Back On Top 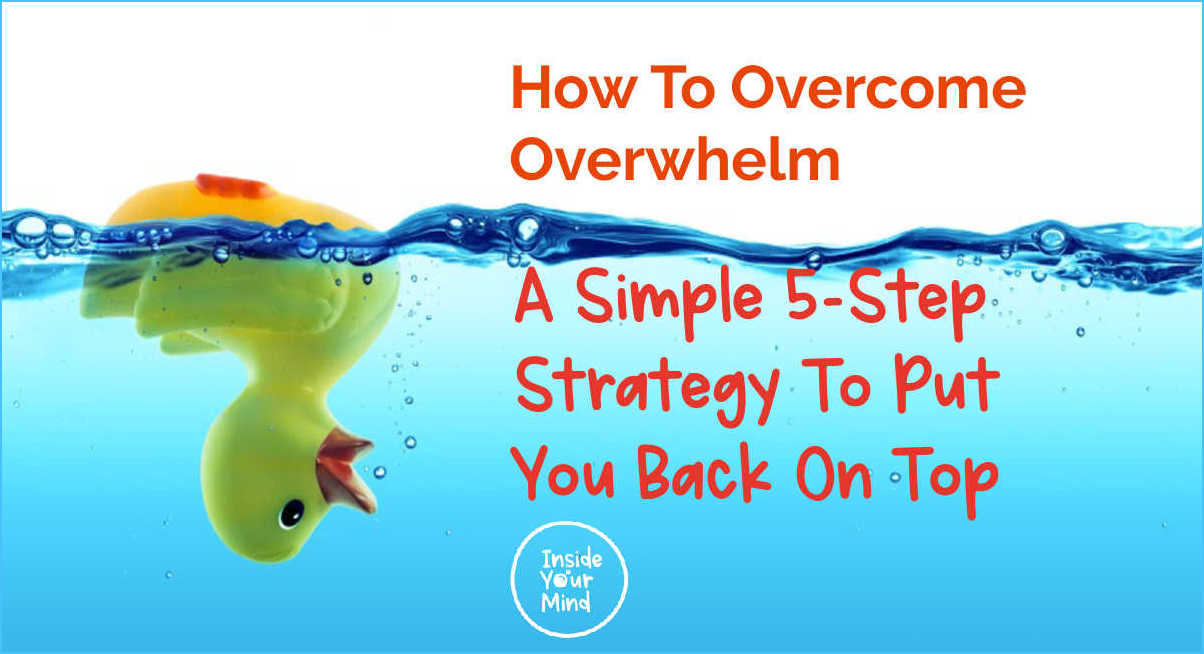 How do you overcome overwhelm?

First, you have to recognise it.

And that’s easier said than done when you seem to be fighting one losing battle after another without coming up for air. Or, when your brain seems to be going round and round in circles, jumping from one worry to another without interruption. Or, you feel paralysed and unable to do anything, let alone achieve any kind of balance.

What exactly is overwhelm?

In the sense I’m talking about here, overwhelm is the feeling of being buried, drowned or overcome by events and problems.

How do we become overwhelmed?

Most of us can cope with several events occurring in our lives simultaneously. Some even thrive on it. We manage, we organise, and we get through what we need to get through. But when life throws us several curve balls, all at once, we can’t catch them all, let alone do anything with them. At that point, we’re likely to experience overwhelm.

Jamie was a stressed senior executive. As he told me his problems, he jumped from one aspect to another almost without taking a breath. When I’d heard about seven issues, I experienced overwhelm myself. Whoa there!

Most of us can only remember 5-9 chunks of information at once. So, when I started experiencing the weight of Jamie’s issues, I realised Jamie was overwhelmed too.

If you’ve ever been in a state of overwhelm, you’ll understand

It’s an awful state. You’re stuck and your entire body is stressed out. Sometimes you’re physically unable to move; you feel paralysed. Your jaw is tightly clenched, and you’re as wound up as a cop on terrorist alert.

Your brain operates at a million miles an hour, making it almost impossible to isolate and deal with a single thought. And you struggle with an underlying sense of dread. It appears as though — even if you resolve a couple of your issues — the impact overall would be negligible. You feel desperate and that it’s going to take years to get back to ‘normal’.

Despite everything, there is good news, and there is a way out. Best of all, it’s simple and will have you back in control in no time.

So take and deep breath, and let’s dive in to

When all the things you’re dealing with are going round and round in your head, you can become so tired just thinking about them all that you need a rest! So get it all out of your head. Write everything that is bothering you, or that you have to deal with. Rather than do this as a list, draw several bubbles on the page (see example below. Now put each issue in a separate bubble. Add more bubbles as necessary!

Let’s use Jamie’s problems as an example 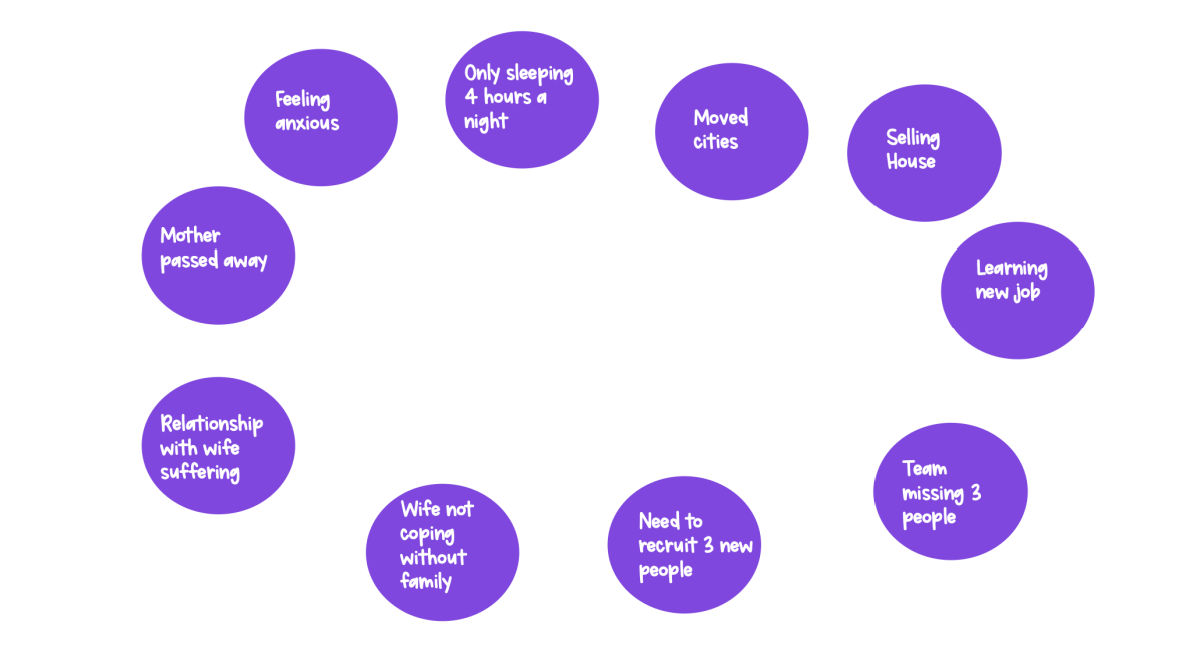 Be specific about each issue

Your brain copes better when it’s got specific things to deal with. Vagueness causes more stress and overwhelm. So don’t just put ‘debt’ for example, put the exact amount, for instance ‘$3200 in debt.’ Or ‘withholding my unwanted emotions from my wife.’

When you’ve emptied your head — so to speak — you can notice the connections between the issues you have in the bubbles. Your whole life is connected in one system.  So, when you work on one issue, it will automatically have a positive impact on some of the other issues you’ve identified. This means that slight improvements in one part of your life can precipitate exponential results in another.

Look at your bubbles and draw lines between the issues that are connected. Writing your issues in a list format makes it difficult to make these connections.

When Jamie examined each of his issues, he clearly saw the connections between them. Fixing one or two would ease the others. As the problems were now outside his own head, he considered them more objectively. He felt some compassion for his situation, just as he would if someone had informed him of the multitude of issues that they were attempting to deal with.

Here are some of the connections Jamie made. (I’ve left some of them out for clarity.) 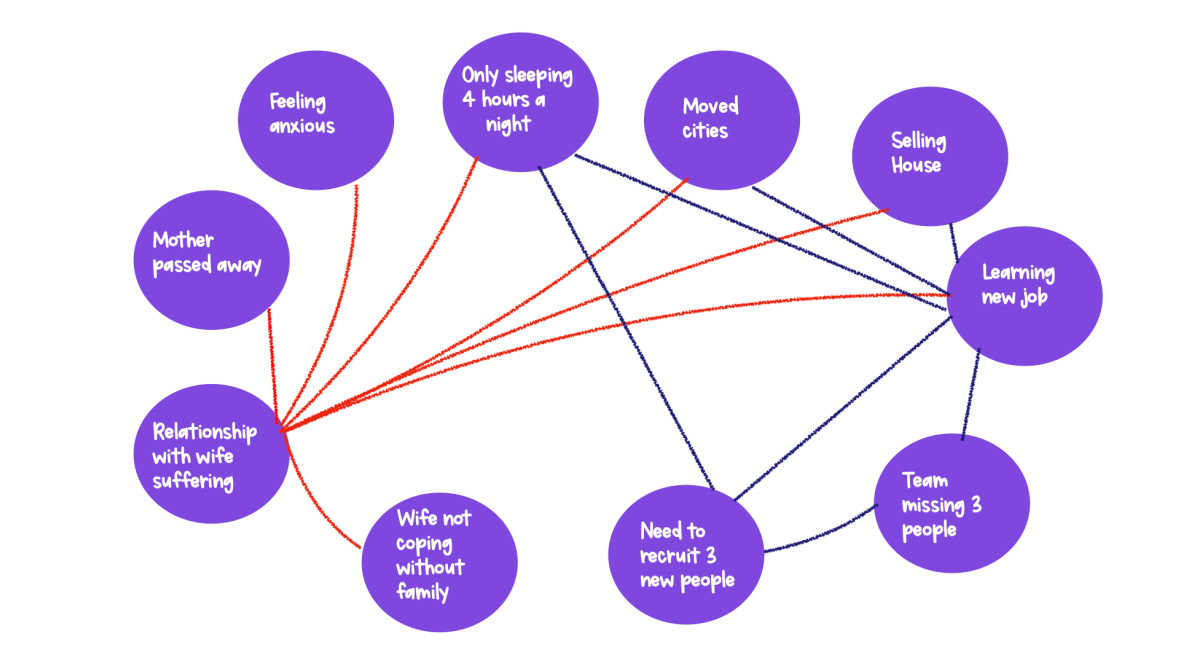 O.K. So they’re connected. Now what?

Now it’s time to work on one problem. You have a simple choice.

To overcome overwhelm you could start work on

Jamie decided reconnecting with his wife was the thing which would have most impact on many of his other issues. You can clearly see this from the connections from his ‘relationship with wife suffering’ bubble and his other ‘problem’ bubbles. Coincidentally, it was also the easiest to fix, and the one he wanted to start with.

He’d tried not to tell her all his troubles, so as not to worry her. But, as most partners will tell you, they always know when something is up, and become more worried when they’re not kept in the loop. They would much prefer to know the truth, so they can help.

Which brings me to …

A problem shared is a problem halved.

Depending upon the issues, you might talk to your partner, a colleague, a friend, a coach or a counsellor. Let them know what’s concerning you, and that you’re feeling overwhelmed. Ask them if they’ll look out for you, perhaps check in with you every couple of days. Just be a buddy. A couple of minutes on a phone call might be all that’s needed to help you stay on track.

Focus on the one thing you’ve identified to work on, and focus on that. You might not be able to avoid the others, but give that one thing priority for an entire week or until it’s sorted enough for you to see progress.

At the end of a week re-evaluate how you’re feeling now. Scale it if you like. So let’s say that when you were completely overwhelmed, you rated yourself at ‘one’ on a scale of one to ten. How are you after a week? You can get your buddy to ask you this question too.

In Jamie’s case, talking to his wife made all the difference to them both

They realised they were both grieving for Jamie’s mum. They talked and shared their grief, supporting one another, and reconnected at a deeper level. Jamie’s wife volunteered to deal with the real estate agents who were selling their house, and to keep Jamie informed. And with their relationship back on track, Jamie seemed more in control and able to handle the situations at work. In one week he went from a one on his 1-10 scale to a 5. Yes, one week.

Go back to your bubble diagram from Step #1

Re-evaluate the items that are in the other bubbles. Use the same criteria and decide what you’re going to work on in the coming week. Then, repeat step #2 – #5.

In Jamie’s case, in the second week, he decided to talk to a couple of senior people in his new company and get some help with replacing the staff who had left.

If you’re bogged down with the physical, mental and emotional symptoms of overwhelm: 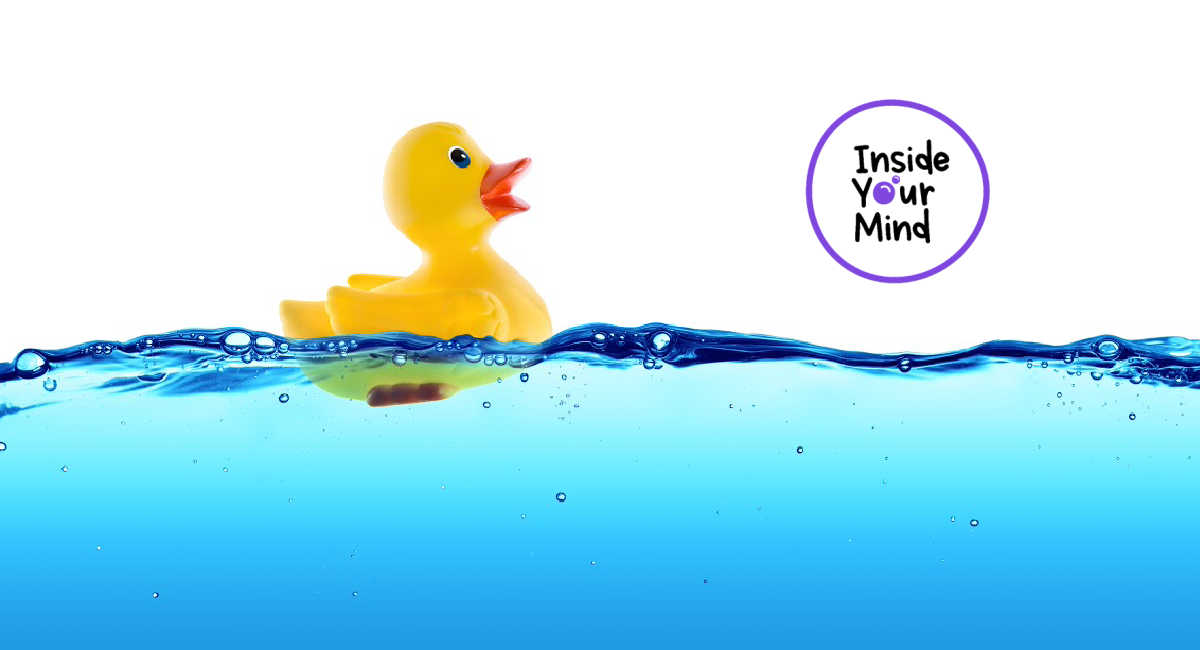