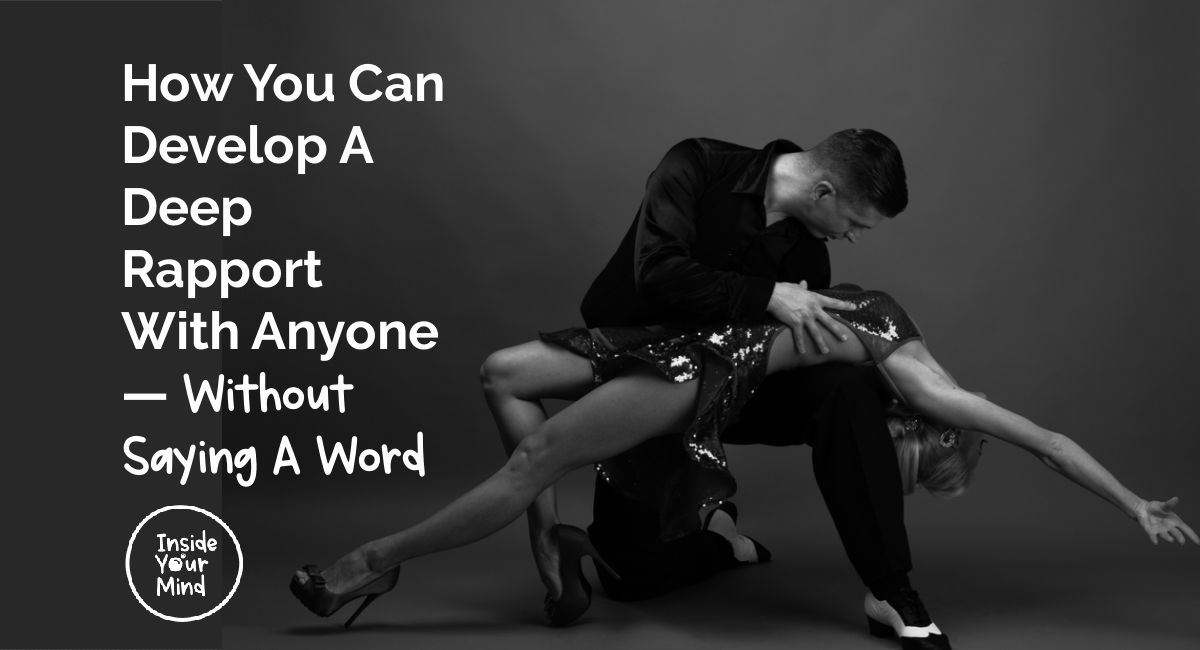 Rapport is the basis of trust

The dance routine was so moving and beautiful, it brought a tear to my eyes. There was a graceful and flowing rapport between the couple and they danced as if there was no one else present, engrossed in each other as the dance itself developed.

The gentle toing and froing of the movements seemed to create a deep and exquisite understanding and connection between the couple.

As humans, we long for connection, but may not always be sure how to achieve it.

You can accomplish it by establishing and maintaining rapport

But what is rapport?

Rapport is a French word that doesn’t have an English equivalent. When you have rapport with someone, you have a feeling of harmony, of being on the same wavelength, of seeing eye to eye. Rapport, in this sense, provides a basis of trust and understanding.

You can gain rapport with a person both verbally and non-verbally. In this post I’ll stick to non-verbal rapport.

How do you gain rapport non-verbally?

You mirror the other person’s body language.

Mirroring involves behaving or reacting like a mirror image of the person you want to build rapport with. Imagine you are sitting with someone having a drink with no table between you. The other person bends their left leg and stretches out their right leg.

To mirror this aspect of their non-verbal language, you would have your right leg bent and your left leg stretched out. You would lift your glass to your lips at the same time (or shortly after) the other person lifts theirs, using the opposite arm to the one they use.

This toing and froing process would continue throughout the entire conversation. It becomes like a dance. If you haven’t come across the idea of mirroring, as a way of gaining rapport, it might seem a little strange that you would try to behave this way.

You wanna work with people who you have a rapport with. You finish each other’s sentences a bit creatively when you’ve worked together for a while. ~ Joshua Henry

So there are two things it’s important to understand at this point:

I’m aware of this for two reasons

First, a few years ago, scientists discovered a specific neuron in the brain which governs our mirroring behaviour. Guess what they called it? The mirror neuron! Even monkeys and apes have this neuron. The scientific and evolutionary theory behind mirroring is that, as humans, we like people who are like us.

So when we mirror another person’s body language, without realising, we’re saying; “Hey, look — I’m like you!”

But even before the discovery of the mirror neuron, I knew people mirrored each other, because I’ve seen them doing it.

I’ve watched them in many everyday situations

I see them mirroring each other in every situation imaginable whenever they like and/or want to get along. And I’ve seen people in training courses where I’ve put thousands of people through a simple exercise.

The exercise involves pairs or small groups having a simple discussion. During the discussion — and having never learned rapport — they mirror a complete stranger’s non-verbal language. It often takes less than a minute for this to occur.

It always amazes participants when it’s pointed out to them what they’ve been doing, without realising.

There might be situations where you need rapport in order to move a relationship forward. For example, on a first date, in a job interview or talking to someone who it’s imperative you get on with, but who you may not like.

Remember that rapport is the basis of understanding, influence, and persuasion.

But if you don’t recognise how to do rapport on purpose, you can’t use it in a productive way.

What might have been a wonderful relationship might crumble and fail — before you even get acquainted with one another! So although I’ve shown you good reasons you’re doing rapport unconsciously, I bet you’d like further proof, right?

All you need to do to prove this is to go somewhere where people gather; a cafe, for example. Then just look. You’ll see people doing just what I’ve described; sitting like mirror images of each other, taking a drink or leaning forward or back simultaneously. With a little discernment, you’ll also be able to spot the people who are out of rapport as well! 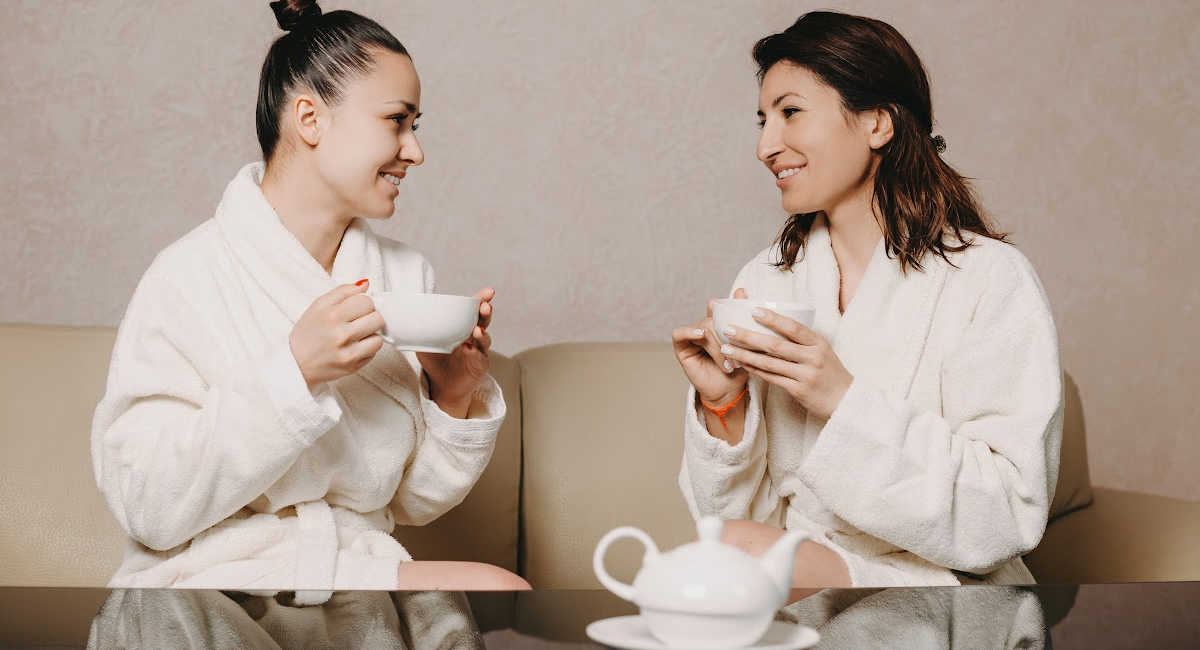 When you’ve seen enough to convince yourself that people do indeed mirror each other’s non-verbal language, you could try it out for yourself.

How would you do this?

The key is to alter your own posture and non-verbal language as naturally as possible. If the person you’re with alters their posture, you don’t have to mirror it at the exact moment, as this would just draw attention to yourself. You can do it in your own time. You could also notice the other person mirroring you. It’s kind of like a dance. So notice who’s leading and who’s following the rapport.

After a while, try leading it. You lead the rapport by changing some aspect of your own behaviour and seeing if the other person follows your lead.

But make sure the dance doesn’t get too weird

If you are the opposite gender to the person you’re mirroring, echoing some of their non-verbal language might appear awkward or strange. For a man to mirror a woman fully could be very weird in some circumstances, and might send quite the wrong message! And vice versa.

In these situations, you can approximate the same behaviour. So, if the other person crosses their legs and that’s uncomfortable for you, or would appear silly, just cross your ankles. Remember, your intention is to create harmony and trust; to show you genuinely care.

People don’t care how much your know, until they know how much you care ~ Theodore Roosevelt

Rapport does not involve mimicking

When you mimic someone, the intention is to make fun of, or mock.

If you mock someone you’re almost guaranteed to get out of sync!

In fact, you want to do the opposite.

Your intention with rapport is to build trust and connection.

The ability to build and maintain harmony will facilitate deep connection. Rapport is powerful, so it’s important to use it with consideration and integrity. Then your relationships will become like a dance, based on a sound connection and an exquisite mutual understanding.

Here’s a quick recap on rapport: 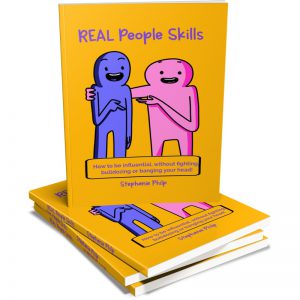 ← How To Make The Right Decision When You're Spoilt For Choice Anchoring: What Have Pavlov's Dogs To Do With You? →