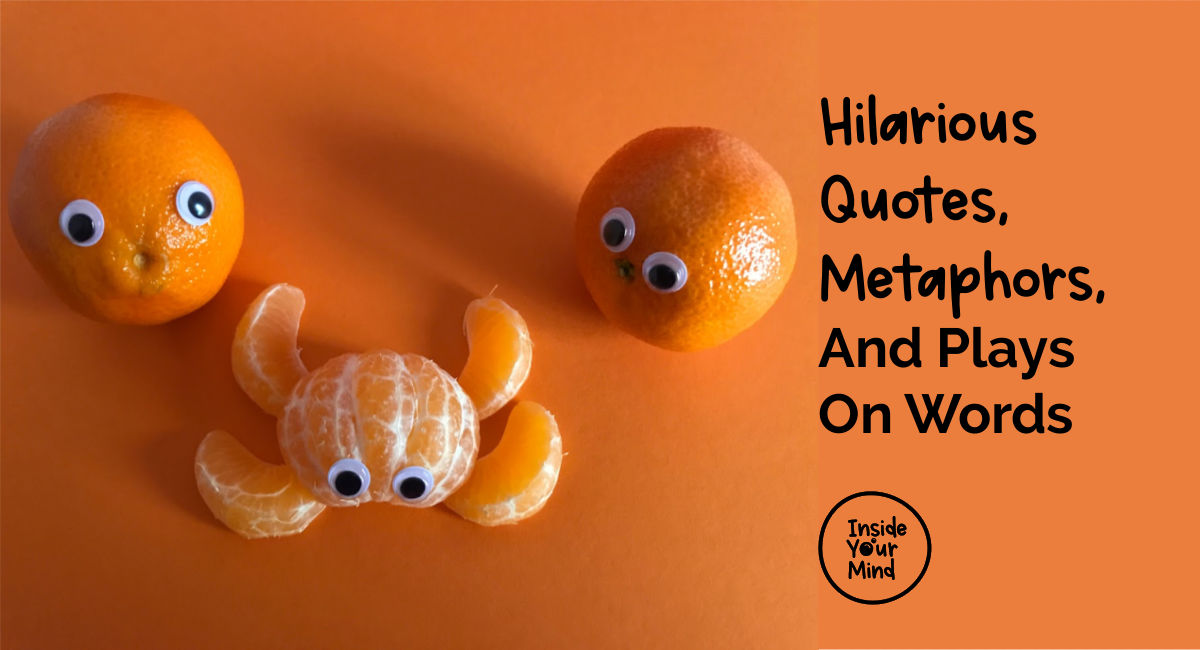 We all need to have a little giggle, or better still, a good belly-laugh — the kind that makes you feel exhausted when you eventually stop.

This post contains a variety of hilarious quotes, metaphors and plays on words, which I hope will make you laugh out loud — or at least snigger with glee.

The Philosophy of Ambiguity

The Psychiatrist and the Proctologist

We all know what a psychiatrist is, but what’s a proctologist? My dictionary says it’s the branch of medicine concerned with the anus and rectum. (I guess someone has to do it!)

Anyway, the psychiatrist and the proctologist opened an office in a small town and put up a sign

It read: ‘Dr. Smith and Dr. Jones: Hysterias and Posteriors.’

The town council was not happy with the sign, so the doctors changed it  to read, ’Schizoids and Hemorrhoids.’ This was not acceptable either, so in an effort to satisfy the council,they changed the sign to, ’Catatonics and High Colonics.’

Then came ‘Minds and Behinds.’  Still no good.  Another attempt resulted in, ‘Lost Souls and Butt Holes.’ Unacceptable again.

‘Freaks and Cheeks?’  Still no go.

‘Loons and Moons?’  Forget it.

Almost at their wit’s end, the doctors finally came up with:

Think you’re having a bad day?

Fire authorities in California found a corpse in a burned-out section of forest while assessing the damage done by a forest fire. The deceased male was dressed in a full wet suit, complete with scuba tanks on his back, flippers, and face mask.

A post-mortem test revealed that the man died not from burns, but from massive internal injuries. Dental records provided a positive identification. Investigators then set about to determine how a fully clothed diver ended up in the middle of a forest fire.

It was revealed that on the day of the fire, the man went diving off the coast, some 20 miles from the forest. The fire fighters, seeking to control the fire as quickly as possible, had called in a fleet of helicopters with very large dip buckets. Water was dipped from the ocean and emptied at the site of the forest fire.

You guessed it. One minute our diver was making like Flipper in the Pacific, the next, he was doing the breast stroke in a fire dip bucket 300 feet in the air. Some days it just doesn’t pay to get out of bed.

A woman came home to find her husband in the kitchen, shaking frantically with what looked like a wire running from his waist towards the electric kettle. Intending to jolt him away from the deadly current she whacked him with a handy plank of wood by the back door, breaking his arm in two places. Until that moment he had been happily listening to music on his phone.

← Anchoring: What Have Pavlov's Dogs To Do With You? Why Job Candidates With Soft Skills Beat Out High IQ Candidates 75% Of The Time →